skip to main | skip to sidebar

Many of us have direct family links to the Great War of 1914-1918. Some families, like mine, are lucky enough to have access to our own personal war story, told via a series of letters. Ours were written by the two brothers of my maternal grandmother:
The two brothers attended the British Orphans Asylum, a boarding school at Slough in England, and The Kings School at Parramatta in Sydney. Nigel studied medicine at the University of Sydney. He happened to be studying paediatrics in London when war erupted and he served as a doctor with the British Army (RAMC). Early in 1915 Stephen Boulton gave up his position with the Commonwealth Bank Head Office in Sydney and became an artillery man with the AIF. Throughout the war, both young men wrote regularly to their mother living at Gladesville in Sydney.

Many WW1 soldiers sent letters home, or postcards with a few lines scrawled on them, but it’s rare to find a set of letters like theirs, literate, from two brothers in two different armies, telling the story of that appalling war from start to finish. The letters, about 200 of them, were typed in the 1920s and a copy was presented to the Australian War Memorial (AWM) in Canberra. The AWM promptly requested the originals. Stephen's are considered interesting enough to be among the relatively few sets of letters which have been digitised and made available to the public through the AWM website. Nigel's letters have not been digitised, as he did not serve with Australian forces.

I’d previously had our family's typed copies scanned with OCR (optical character recognition) to create a Word document. This is the same process used by the National Library of Australia to digitise old newspapers and publish them on Trove. Since old and faded typefaces don’t scan well, thousands of OCR mistakes occurred, as in the example, where the address at the top of the page, At Sea, became 21T and numerous other mistakes are obvious.


It meant that every single line on every page of the Boulton files had to be read, compared against the original and corrected where necessary. Then the letters were interwoven chronologically. Extensive research into the hiistory of the war enabled some brief introductions to be written for relevant letters, to help the story flow. The task took me over. I dropped out of the world for several months.

A book with a moving story emerged, with the tentative title of Stout-hearted Men. Remember that stirring song from the 1940 show New Moon? Its rousing chorus repeated in my brain for months.Those words seemed so apt for a book about the Great War, when millions marched off in enthusiastic support of their cause.

But I discovered that too many people today don’t know what 'stout-hearted' means, so I road-tested other titles:

Mummy’s Boys – ironical of course. My grandmother’s brothers were anything but!
Mother’s Boys – Nigel was quite formal.
Matee’s Boys – Stephen, more of an Aussie, combined the Latin word for mother (Mater) and the word ‘mate’ to address his letters to ‘Dear Matee’.
Dolly’s Boys – their mother Dora was known as Dolly.

Nothing resonated with family and friends until my daughter suggested Brothers in Arms. 'That’s what the book’s about, Mum!’ So that’s the title I've settled on.

The centenary of World War 1 has produced a deluge of related material, but this book is special. It tells a story, it has memorable characters and an anti-war theme and it sucks the reader in to that whirlpool of a hundred years ago. It should appeal to everyone interested in social and military history.

Posted by Louise Wilson at 1:24 PM 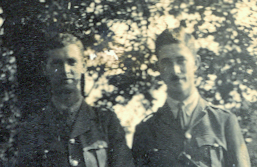